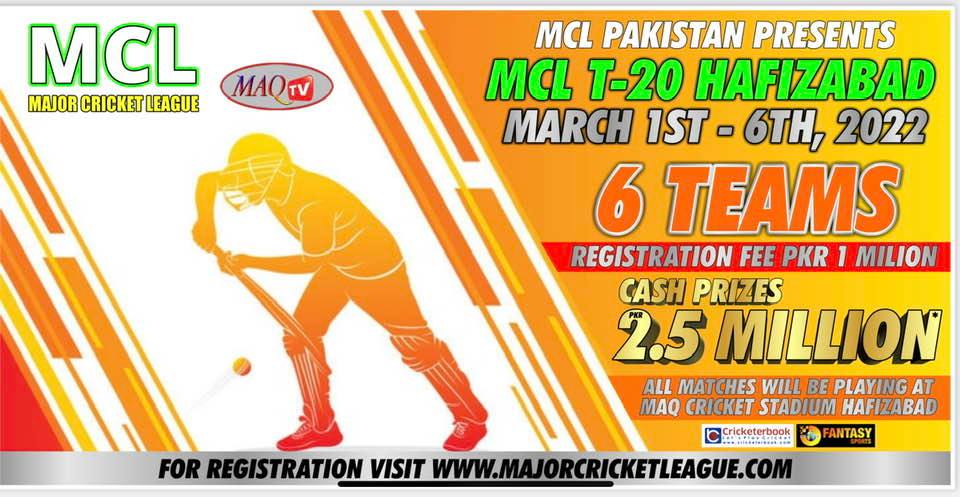 HAFIZABAD/PAKISTAN – The second edition of the Major Cricket League (MCL) Hafizabad T20 tournament will take place from March 1 according to Cricket Council USA (CCUSA). The first tournament was held last year at the Maq Cricket Stadium in Hafizabad and was a very successful event. This year the tournament will bowl off on March 1 and carry on until March 6.This time around six teams will again take part and vie for honors and cash prizes to the tune of 2.5M rupees. The six teams taking part are defending champions Lahore Lions, Hafizabad Stallions, Karachi Sharks, Hyderabad Jaguars, Faisalabad Bears, and Islamabad Tigers. The cost of registering for this tournament is one million rupees and all six teams are already on board. Chairman of Cricket Council USA (CCUSA) Mahammad Qureshi reminded of the concept behind this tournament. “This tournament came about because I wanted foreign Pakistanis to give back to our land of birth. This was a chance for members of the Pakistani diaspora around the world to invest in a team and help young cricketers develop in Pakistan.”We wanted to give young men whether rich or poor the same opportunity to play cricket. The first tournament was a tremendous success and we were able through MaqTv to produce a platform for the players to be seen.”This time around it will be no different as MaqTv will be on-site to carry the matches live to the world. I want to urge all Pakistanis to come on board and be part of this great initiative. All planning has gone into place and we are ready to execute another wonderful tournament.